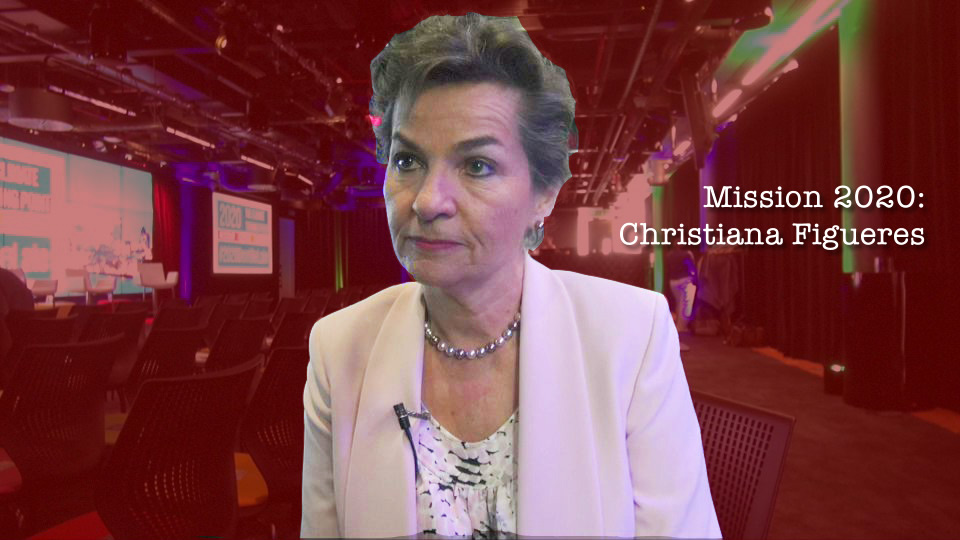 Christiana Figueres: business must lead us to zero emissions


Nick Breeze: As noble an effort as it is, should we be calling this Mission Impossible?

Christiana Figueres: “I don’t think Mission 2020 is completely impossible because the fact is, we just have confirmation from different independent sources that we are for the third year in a row, we have actually flattened out in emissions. For three years in a row we have actually flattened out greenhouse gas emissions and we have an increasing GDP. So we could already be beginning to decouple greenhouse gas emissions from GDP. The fact is we are already walking in the right direction, now what we are trying to do is just increase the pace and the scale. We have to be at a decarbonised economy by 2050.”

Nick Breeze: Has the momentum from Paris been completely dissipated by the Trump electoral victory? What is sustaining your conviction that emissions can be brought down to zero in the small timeframe that remains before we hit catastrophic climate impacts?

Christiana Figueres: “Well I think the international political arena is going to have to make their adjustments if the United States administration decides to do something differently under the Paris Agreement, which we don’t know [yet].

But politics is one thing and the real economy is another. The real economy has not stopped. Neither in the United States or anywhere else. And the reason why they haven’t stopped is because they do know that this is actually the best thing in their own interests, that this is economically beneficial and has many other benefits. So, I am not concerned about reversing the direction. I’m concerned about certainly keeping the direction and increasing the speed.”

Nick Breeze: The post-Paris rhetoric was on the coming together of a trinity comprising civil society, politics, and business. With the British public consumed by Brexit and the American political situation verging on chaos, aren’t we expecting too much of business to carry the baton all the way to the finish line?

Christiana Figueres: “No, I don't think we’re expecting too much of business. Business is not doing this to save the planet, believe me! Business is doing this because it is good business, because there is safer investments, because there is  less risky investments and because the prices are simply going down at such an exponential rate that it just makes more sense to invest into clean technologies than into technologies of the past century. Business is doing this because it is good for the bottom line!”

Nick Breeze: The 2020 report highlights the challenge posed by transport. If you take aviation as an example, you see that we’re still building runways, we’re all flying further for less money. Surely, to hit these goals, we just need to take some individual responsibility and fly less?

Christiana Figueres: “The fact is that you cannot exempt any sector of the economy from these efforts. So you can’t say ‘We’re not going to fly because aviation is too high emitting.’ That is the wrong approach. The approach is: aviation and maritime and land transport, all three of them have to come down in their emissions.

And it’s very interesting that in the last two weeks we have had an announcement from a very small start-up, as well as from Siemens that electrification is moving in the direction of electrification. So Siemens was the last company that just put out last week that they foresee that ten years from now, they will be having airplanes that are fully electric with clean energy and they will have a thousand kilometre range.

So you already have in a very short timespan, you already have flights that can be clean, certainly the short flights and then we have to look at the longer ones. But it is not a question of changing one mobility for another. For the time being if you want to be responsible, yes, definitely go for the mobility with the lowest emissions but that cannot exempt any sector. Every sector has to bring down its emissions… and aviation is coming!

Nick Breeze: What’s the catalyst that will direct the flows of investment capital towards meeting the Mission 2020 goals?

Interview conducted at the launch of Mission 2020 at Google HQ London on 10 April 2017.