Carmel McOuaid Director of Sustainability at Marks & Spencer, winners of Momentum for Change award in the Carbon Neutrality category 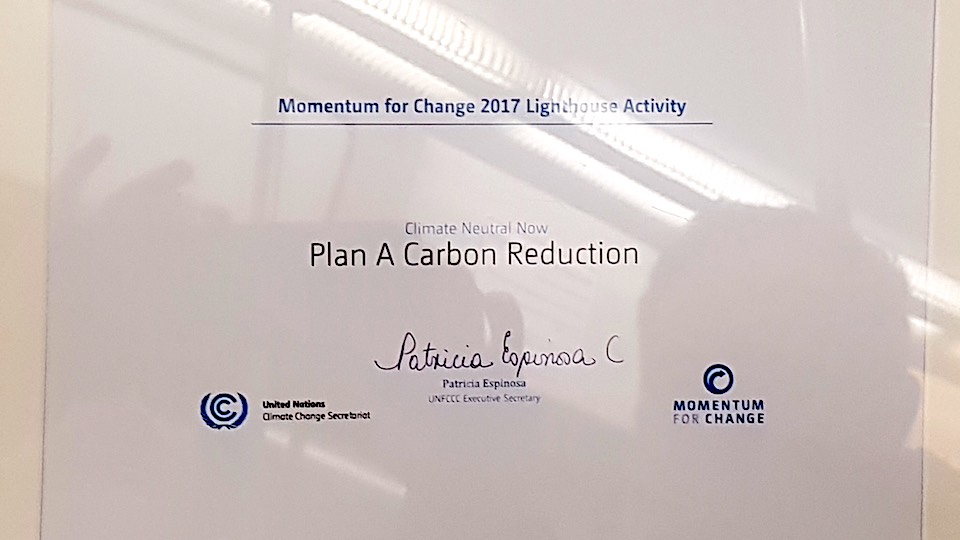 In 2014 Marks & Spencer became the only retailer in the world with carbon neutral operations. This huge undertaking across over 1400 stores has been rewarded with international recognition by the UNFCC winning Momentumn For Change award for carbon neutrality.

NB: When did you set the goal of making M&S carbon neutral and how longs it taken to achieve it?

CM: Yes, we set out our environmental and social plan called Plan A in 2007 and at that time on climate change, we said “What shall we do?”. The obvious goal was to be carbon neutral. Our time period was by 2012, so a 5 year plan and we achieved it for our UK and our RYI operations by 2012. By 2014 we’d extended to cover all of our overseas operations.

NB: When you say all, how many is that?

CM: We have over 900 shops in in UK and Northern Ireland and over 400 overseas.

NB: So that is a huge undertaking.

NB: What were the major challenges you encountered?

CM: The first one was the definition of carbon neutral and what it meant to get there was evolving and changing. Governments were bringing in regulations about reporting and new guidelines so we were trying to keep abreast of that while still following the intent of our quite simple plan.

In our heads it was very simple. We would do everything we could to reduce emissions. We would support renewable energy wherever possible and whatever was left over we would offset.

One of the challenges was keeping on that plan as regulators and stakeholders were debating what could be counted and what couldn’t be counted. That was one challenge for our team.

Another challenge was keeping abreast of technology and commercials. So technologies like solar and wind were not competitive one year but a year of twos time they were changing. So it was a fast moving landscape and keeping abreast of what my be happening was one of the challenges.

NB: We know there is a benefit to the environment, thats obvious but is there any other subsidiary benefits that could entice other retailers to follow suit?

CM: The financial benefits were significant. That was a really good motivation especially in the early days. As we were finding savings in our operations we started discussing it with our supply base.

We have a huge supply base both for food and clothing and also for property. So that was really beneficial in terms of supporting our suppliers and helping them unlock new benefits commercially.

Employee motivation was also a really good one. Lots of employees felt more motivated to get after the efficiency savings because there was a greater benefit to it, not just cost savings.

NB: Was it communicated through the whole business what you were undertaking and was there a lot of support for that?

CM: Yes, that was and there still is. I think it is something that impacts everyone in the business and many people talked about their children coming home from school and being taught about it and then asking their parents what they were doing.

Also, new people coming into the business, young and old, are asking us what we as a business do to take responsibility for climate change. So it is really good to be ale to say “here are are all the things we do and here is what you can do in your role as well!” 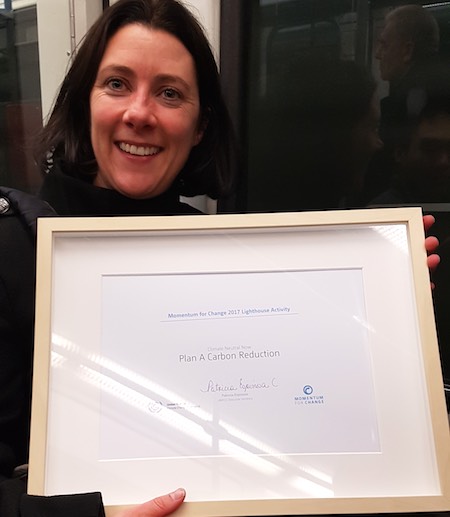 NB: When you frame it throughout the business, is it specifically linked to climate change or was it the environment on a more general level?

NB: The climate challenge is huge. What we M&S be doing next to keep setting an example of what can be achieved in the retail sector and through other businesses as well?

CM: We have updated our Plan A commitments in June this year. We have always done work in our supply chains to reduce emissions and encourage suppliers to do so. What we are doing now is setting specific targets. So now we are wanting to suck 13 million tonnes of carbon out of our supply chain by 2025.

We are watching up the measurements, the robustness of the programmes to really get the level of carbon reduction that we need.

NB: And you’ve done the analysis to check that these goals are realistic?

CM: Likemany of us working climate, we have done a lot of analysis. We have ten plus years of experience of things that do work and we know where the opportunities definitely lie.

Then there is a biota a leap of faith where we don't know exactly how we are going to get that target , but we have to, so we continue to look at new technologies and methodologies to do so.

NB: There is a theme at the COP. It is that once you set a target and go for it, you then increase your ambition and you go further. Is that something you find is working in M&S?

CM: It has worked really well in M&S and I think it works really well with other businesses as well. You get that confidence and you get a lot of learning along the way. I also think by having an ambitious target also forces you to look in areas that you wouldn’t look originally.

The commercial may not pay back this year but in two years the you can review it and then increase the level of ambition again.

Miss Carmel McOuaid is the Head of Sustainable Business at Marks & Spencer's.

Key facts:
Emissions have been reduced by 28% with a 39% improvement in energy efficiency;
Over 5,000 MWh is generated from third-party owned roof-top solar array (one of Europe’s largest) located on an M&S warehouse;
100% of energy is sourced from renewable electricity; 27% of which comes from bio-methane gas;
Since 2012, 2 million tonnes have been invested into high quality carbon offsets and, in 2016/17, carbon offsetting accounts for 30% of baseline emissions or 221,000 tonnes of carbon dioxide equivalent.
In 2014, M&S became the first major company to sign up to UNICEF’s new carbon offset project by providing funds for 40,000 fuel efficient, low pollution cook stoves to be manufactured, sold and maintained by more than 550 local entrepreneurs across 8 districts in Bangladesh. This scheme achieved ‘The Gold Standard’ carbon credit certificat