Why the Porto Protocol?

Wine production in Europe has fallen to 50-year lows due to the impacts of extreme weather events that include hail, frost, drought and rot. No one knows this better than Adrian Bridge, CEO of the Fladgate Partnership, a company that owns some of the biggest names in port including Taylor, Croft and Fonseca.

Inviting former President Barack Obama to Porto was undoubtedly intended to make heads turn. Obama’s administration was instrumental in bringing the Paris Accord into being, but here in Porto he acknowledged that “the targets set by the Paris Accord are not enough to avoid catastrophe.”

Obama talked extensively about the linkages between extreme weather impacts and migration, and how these ultimately connect to conflict. His overall message echoed that of the Porto Protocol: the only way to solve this crisis is to work together.

Impacts are real and more frequent

Adrian Bridge is keen to promote the need for action and sharing of ideas that can reduce losses that are already threatening many businesses. Making the point that we need solutions, he stated that his “company … had a vineyard completely wiped out in a single hour, after we had this hail storm at the end of May… we had 12% annual rainfall in one hour. That event cost our business about €400,000 by the time you count all the erosion, infiltration, damage to buildings and so on and so forth.”

In wine regions such as Burgundy, cannons firing silver iodide into storm clouds have been put in place to convert the crop-destroying hailstones into rain. To work, this requires an integrated response between different farmers and a commitment in terms of land and resources.

Is it worth it? Bridge says, "Running a system of seeding clouds costs a whole lot less than [€400,000]. As a big company, we can do it. Smaller farmers alongside us who don’t have the financial resources would benefit… well great! That is great!”

Adrian Bridge is a determined character with a great deal of success in the wine trade. His attitude is geared to action and cooperation reaching beyond his own business to other industries where experience and learning can be shared.

He says, “Instead of thinking in silos of wine industry and wine solutions, hopefully, we can learn from other industries and we can be a platform that gets lots of people to join from various different industries.”

Obama echoed this sentiment of cooperation stating, “..adaptation is going to be required for winemakers, for example, to share best practices in terms of how they can sustain their industry in the face of rising temperatures.”

Go public on the cost of solutions versus impacts

Obama continued, “But I think it would also be important for the industries that are being effected to publicise the impacts that a changing climate already has. Because one of the challenges in the climate change debate has always been, that… it is not an immediate catastrophe.”

“What businesses can do is to start putting a figure in terms of the losses that are current, or, the expenses required for adaptation. Because that information already exists, it’s just no one does it.”

“The reason that it is important to start attaching a price to losses, or expenses to adapting to a warmer climate, is because one of the main arguments against doing something about climate change is that it is going to cost too much, or it is going to have an impact on our economic competitiveness.”

“Now, if you can say, ‘ah listen, in Miami, we are in the middle of a beautiful sunny day’ and you start to see floods because the ocean is literally coming up through the ground, two feet high in residential neighbourhoods. If that is going to cost, eventually 20 billion or 100 billion or half a trillion dollars of property damage, then why would we not spend 50 billion dollars to start implementing more clean energy strategies? You then get it cost-benefit analyses to support change. That, I think, is something that is very important.” 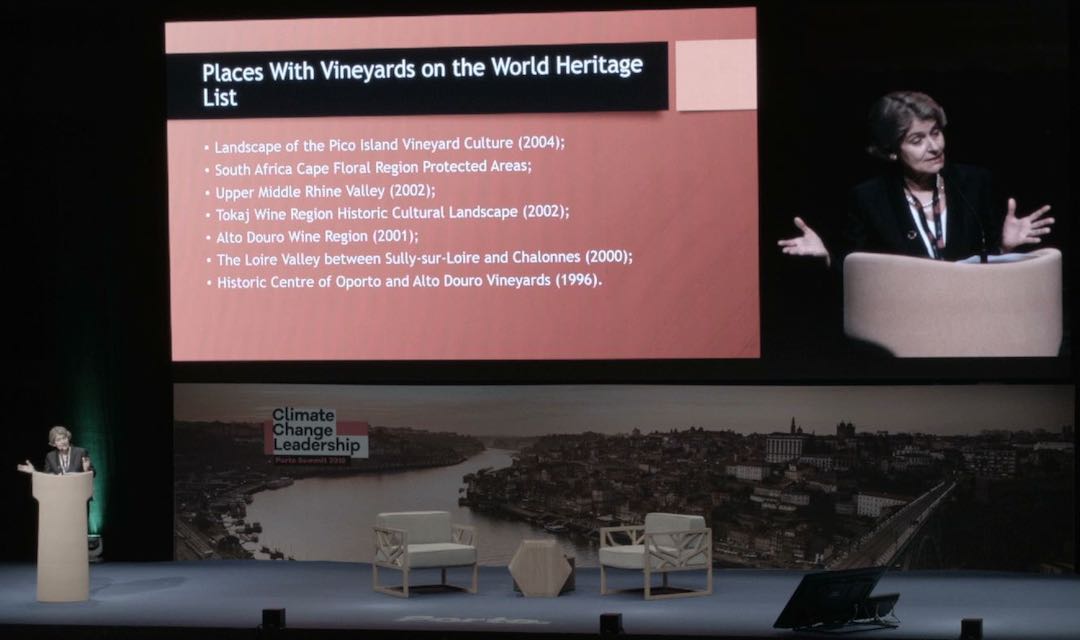 Also speaking at Climate Change Leadership summit was top UN diplomat and Director General of UNESCO, Irina Bokova: “There is a new kind of index, a new measurement, which is called the Climate Vulnerability Index (CVI) for UNESCO World Heritage sites to be established.”

Bokova highlighted how the CVI would list the most vulnerable sites around the world, many include vineyards like Champagne or the Douro, but also places such as Venice, and how the preservation of these sites is a way of protecting our cultural identities and culture.

Bokova cautioned against complacency at this point in time: “This is the scariest part of global warming, the fact that we won't be able to undo the damage done. That we won't be able to extricate Venice or New Orleans from the sea. Their disappearance will be a net loss, regardless of what mountainside civilisations will someday rise.”

“We must take very serious measures because climate is not only destroying our livelihoods, our economies, the lives of future generations. It is not only causing conflict, migration and wars. We know that populations move because of climate, destruction, desertification, loss of water resources.”

“The worst part, of course, I speak from the point of view of UNESCO and the World Heritage, is that climate will just make our common history disappear, our common memory and at the end of the day, our diverse identities.”

Porto Protocol is a quest for survival

This one-day event in Porto brought together world-class speakers and an audience curious to learn more about climate change. The issue still remains, how do we move from being a talk-shop to a do-shop?

In March 2019 the Porto Protocol will move into what Bridge believes is the do-phase. A two-day conference where solution providers and stakeholders from the wine industry and many others will converge into a rich exchange of ideas focussed on overcoming the future challenges of climate change.

On a hot evening at Taylor’s Port Cellars on the banks of the Douro, Adrian Bridge, says exactly what every CEO around the world should be saying:

“The point is to do more tomorrow than you are doing today. So if you haven’t started to change your business to help mitigate climate change, it is time to start and start now! If you are already doing a lot, do more!”

Nick Breeze has been interviewing a wide range of people in both climate change and the wine industry for over a decade. He is currently part of a new initiative at wine-weather.com and writes for SecretSommelier.com and TheEcologist.co.uk. He can be followed on Twitter at @NickGBreeze